The highly successful Berridale Ewe Competition has been run and won again in 2013. This years winners are as follows: 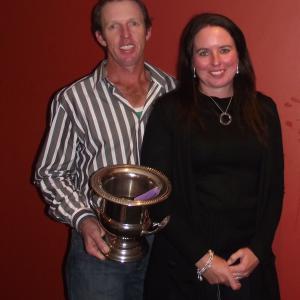 What a difference a week makes in the wool market. Last week the market turned around from a slide many had not expected, and then this week more of the same has totally changed the outlook. All of sudden, the market has lifted, forward trading is ramping up again, auction offerings are falling and so is the dollar, with the AUD now well under parity. Quantities at auction are not expected to exceed 40,000 bales per sale until the end of the season, with most weeks looking at something less than 35,000 bales. There's been quite an amount of new business written in China in the last two weeks as well, so all is in readiness for a very solid end to the season.

With all that in mind, the next question is, what about the spring? Answer: Who knows? What we do know however is that there is now an opportunity to lock in a percentage of your production at where the market is now. Now is the time to really start thinking seriously about just how much of risk you want to take. This is a question that many wool producers are simply not comfortable to answer, so they do nothing. This "do nothing" mentality is really not the best attitude in a 2013 wool market.

On Tuesday 18th June in Cooma, and Wednesday 19th June in Forbes, Jemalong Wool in conjunction with Riemann will present a short seminar explaining just how simple and risk free it is to "do something" about not running the risk of the market falling just as you intend to sell.

Claim the date now. June 18 in Cooma, and June 19 in Forbes. For Tamworth clients, we'll be doing something similar around the end of July.